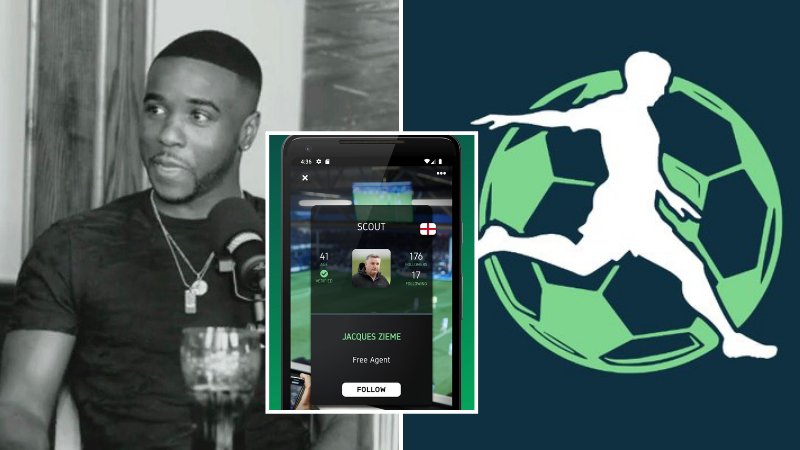 Brandi joined United at the age of eight, playing for his local team West End Boys, and with Danny Drinkwater, Gerard Pick and Giuseppe Rossi, Fabio and Rafael Da Silva and Tom Cleverley.

Fast forward to today, and 32-year-old Brandi has been busy running Scouted, a revolutionary football app set up to give anyone a second chance at a former forward professional game.

With 8,000 and 10,000 users globally in 82 countries, countless players are under trial in the UK and abroad, while Brandi is in talks with the Johan Cruyff Institute in Barcelona for a working relationship.

“Some people work with me but this time it’s like a solo band so I have to keep an eye on everything,” Brandi said .

“My sleep pattern is a little crazy. It literally responds to players, scouts and parents from morning to night. It takes me a while but it’s worth it.

“The clubs like it, the players like it and the parents like it. It is cost-effective because it is beneficial for all and benefits the club.

“If a scout travels from Manchester to Scotland to see a player, let’s say they can see up to 300 players on a scouting app.

“The players are putting themselves in a 24/7 shop-window which is still not where I want it to be but it has to start everywhere.

Scouted is viewed as a football version of the popular employment website LinkedIn. And the concepts are incredibly similar.

Using the app, three-year-old players (anyone under the age of 18 needs parental guidance) will be able to upload video footage they play and opt for scouted trial events.

Scouts are also there, browsing to see the full range of different players. Brandi and his team split it up to 50-0 so that the scouts would see which players were in action, while the players had the opportunity to apply.

One player was flown to Finland at the University of England and awarded a contract, while the other went to the Philippines.

But Scouted’s biggest success story so far has been the transfer of Salford City to 18-year-old Ollie Fanon, who signed a professional contract.

Seeing Ollie get his chance after experiencing rejection, Brandi felt like a “proud father.”

“Ollie started in Man City when he was 13 and left when he was 14. He played in Partington Village from age 15 to 16. He was in the app and he heard about the experiments.

“I think he came in twice. He played well in an experiment but the scouts wanted to see him again. He had a few teams asking about him – West Brom, Swansea and Burton.

“But obviously he’s a local boy and Salford City is right around the corner from him – I think he goes into training – that’s how close he is!

“They really liked him and signed him.”

Gary Neville, co-owner of Salford City, is a big supporter of the Brandy project and has the ability to link with companies in the US and Mexico for Scouted.

It started out as ‘Scouted UK’ but due to the global appeal they already had to change the name.

For Brandy, the surface is still not scratchy.

“It’s a project. If I’m honest, there’s no end goal. I think it’s just one of these scenarios that is growing and growing.

“We started it in football because I know football is in the back of my hand but we’re going to rugby, tennis and basketball.

“Some of my friends who play in the NFL, I have some people I know in the boxing world. There is talent in everything. We are going to go to music.

“There are a lot of people who see my vision and go behind it.”

Brandi, who has represented a total of 14 clubs and played in Thailand and Greece, has not officially hung their shoes.

His main primary focus was signing from Scouted, and he had offers to train with pre-season clubs.

“I started at Man United when I was 8 and left in the era of Sir Alex Ferguson. I was lucky enough to be there for a long time but there were a lot of players who were not good enough to play for United but they were good enough for a lesser team.

“But their parents or parents didn’t have the connection to add them to the team and they could fall in love with football.

“It has been going from year to year. When I was about 28, I thought I should create a platform for players to stay in the store window and fall in love with football.

“In my career I have had situations where football clubs have to look at some video footage and I may not have it. It is kind of hard.

“The scout does not say that the club will sign a player just by looking at the clip, but rather giving the club some indication of what kind of player they are going to get.

“I know the club will not sign off on players looking at the App. The player may have a bad attitude and the club can bring him to look at it on a personal level.

Their next, final of the year will be on December 4 and 5 at Plot Lane in Manchester.

Usually 44 players form four teams of 11, with 20 scouts attending from the Premier League to the non-league.

“You’re going to put some players down there and players but I think the best thing is to give everyone a fair crack of the whip.

“Some players can be scouted by teams at the elite level and some are non-league scouts. It’s really open to everyone – clubs and players of all levels.

“If I give them a platform to succeed, or step on a ladder, it will do me good.”

The business is now self-sufficient, with Brandi hoping to have a world tour next year, bringing Scouted to Ireland, the Netherlands and finishing in Spain or Italy.